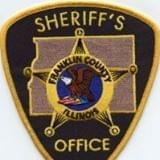 FRANKLIN CO. – The Franklin County Sheriff’s Office is searching for a man considered armed and dangerous.

43-year-old Anthony Lee Melvin was last seen near Murray St. in Sesser, IL wearing a black tank top and brown pants. According to a release, he assaulted a police officer and fled the scene of a crime.

He’s described as a 6’1 white male with brown hair and blue eyes, weighing around 205 pounds.

If spotted, the sheriff’s office advises you not to approach him. If you have information on his whereabouts, call 911 or contact the Franklin County Sheriff’s Office at 618-438-4841.