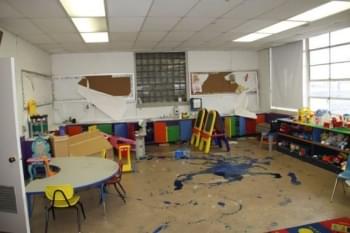 MT. VERNON – Jefferson County Crime Stoppers will offer a reward for information leading to an arrest of those involved in a recent break-in and vandalism at Kingdom Kidz at 500 Harrison Street in Mt. Vernon.

According to police, the building was broken into and extensively damaged at an estimate of $50,000 including broken windows, destroyed cribs, scattered toys and profane graffiti in multiple areas of the building.

The incident was named the “Crime of the Week” by Crime Stoppers. Those with information can contact the police department at 242-2131 or Crime Stoppers at 242-8477 anonymously. A cash award may be awarded to information leading to an arrest.