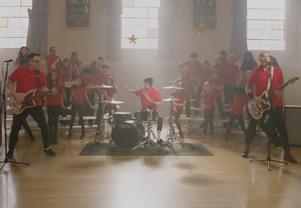 To assist relief efforts for firefighters, citizens and others in the aftermath of the Australian bushfires, Blink-182 opened a new merchandise line with all profits going to Australia Zoo, which has helped treat thousands of animals displaced by the fires.

The new line features a t-shirt and raglan with the Blink rabbit posing as a firefighter while holding a koala and Australian flag. The band shared previews of the new clothing on Twitter:

Australia is being ravaged by deadly fires, and we just feel so helpless.

We put out a new merch line + donating all proceeds to charity.

Let’s do our part to make sure everyone, the environment, plus all of these kangaroos & koala bears are safe. 🐨 https://t.co/IIFTOVfM31 pic.twitter.com/Pd8XsshaB1

“Since the season began in 2019, an estimated 480 million mammals, birds and reptiles have been killed and nearly 1 billion animals will be impacted as the bush fires continue to burn,” a statement on the band’s store said.