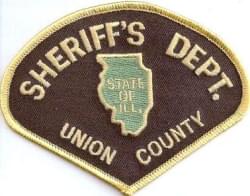 ANNA – The Union County Sheriff’s Office is asking for assistance in finding a man believed to be armed and dangerous.

According to a release from the sheriff’s office, 43-year-old Michael Dailey is wanted for stalking, and is believed to be in the Carbondale area.

Do not approach Dailey if he is located. Those with information on his whereabouts are asked to contact their local police department or the Union County Sheriff’s Office at 833-5500.