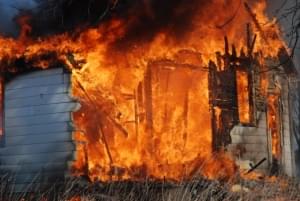 WEST FRANKFORT –  A West Frankfort home was badly damaged as the result of an early Monday morning fire.

According to city officials, crews were called to the 300 block of W. 7th St. at around 4:13 this morning to a fully involved house fire. The West Frankfort Fire Department, alongside crews from several other fire departments in Franklin County were able to get the fire under control and put it out shortly after. The home received significant damage and the garage was considered a total loss. A nearby motel was also damaged as a result of the fire.

No injuries have been reported. The State Fire Marshall has been called in to investigate the cause of the fire.