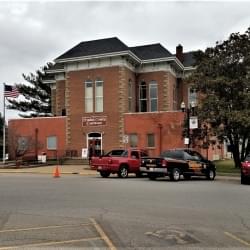 Members of the Franklin County Board were present alongside other state and county officials to share a few words about the courthouse, it’s history, and what’s coming with the new $20.8 million courthouse on the Square.

Franklin County Circuit Clerk Jim Muir said it took a bipartisan effort to sell the new courthouse project to voters last year, with two other courthouse referendums failing in recent years. He said it’s time to move toward the future with construction of a new 47,000 square foot courthouse that will face west on the Benton Square.

The new courthouse will also have a sally port on the north side where law enforcement can drive up, unload prisoners and place them in holding cells. Secured elevators will also be used for prisoners, a major safety improvement because prisoners were brought in the same door as the public at the old courthouse.