If you don’t know the drama around Guardians of the Galaxy and it’s previous director, James Gunn, here’s the short version-
Gunn was fired over some old distasteful tweets.  Then he had such an outpouring of support that he was rehired as director.

He shared in a TASTEFUL tweet about the movie, how the original release month would have been this month, May of 2020.

Now, it seems like production should start in 2021 and we won’t see another installment until 2022. 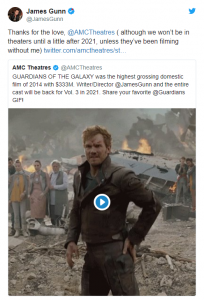