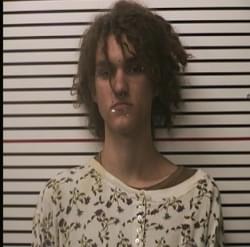 CARBONDALE – A North Carolina man is accused of vandalism that allegedly happened during a planned protest Sunday night in Carbondale.

At 7:30 p.m., a witness in the protest area reported to an assisting officer from the Carbondale Police Department that one of the demonstrators had spray painted a private property retaining wall in the 500 block of University Ave., providing a video of the vandalism.

Police said the vandalism suspect, identified as 20-year-old Thomas Bruefach, was found in the 400 block of South Washington St. after the protest. Bruefach was taken to the police department, where he was issued notices to appear in court for Carbondale City Ordinance violations of criminal damage to property and resisting a peace officer. Bruefach was released with pending court dates.

Officers were in the protest area protecting demonstrators from traffic as they marched in the downtown streets from 6 to 8:30 p.m.