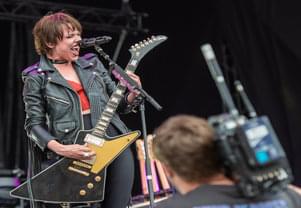 For their newest album, it could be a DOUBLE ALBUM!!!  (which makes me think of the Double Rainbow guy- RIP)

Since quarantine, they have been writing a lot, working hard, and Lzzy said, quote “we’re busier now than maybe we would have been.”

There is no word on when the possible “double album” by Halestorm will be released.