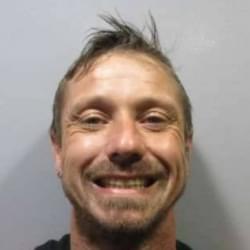 MCLEANSBORO – A McLeansboro man wanted on a Hamilton County warrant is now facing new charges after McLeansboro Police were called for service in the 700 block of N. Virginia St. shortly after 4 p.m. Monday.

According to McLeansboro Police Chief Nathan Taylor, after officers made contact with the caller, 37-year-old David J. Graves, it was determined Graves had a Hamilton County warrant for his arrest for harboring a runaway from an incident on July 7.

As officers were attempting to take Graves into custody, he resisted arrest. After being taken into custody, a small quantity of suspected methamphetamine was also located on Graves.

Graves was arrested for the warrant and on new charges for resisting arrest and possession of less than five grams of meth. Graves was taken to the White County Jail pending bond set by a judge.

The McLeansboro Police Department was assisted by the Hamilton County Sheriff’s Office.