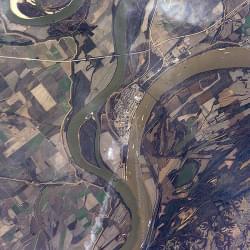 CAIRO – The Alexander Cairo Port and American Patriot Container Transport have announced a new agreement which could help advance the Cairo Port project.

In a release from American Patriot Container Transport, the two disclosed the Cairo based port will provide intermodal container handling services for the transport company’s new model of ship, which they claimwill not only be more efficient, but more environmentally friendly as well.

The announcement comes a month after Governor J.B. Pritzker announced that the state would invest 40 million dollars into the port project.